With the and languishing in bear market territory amid a broad-based selloff in the tech space, Wall Street shifts into high gear next week with some of the biggest names in the market set to release financial results.

As such, there will be a lot on the line when the so-called ‘FAAMG’ group of mega-cap companies report their respective results.

Microsoft (NASDAQ:) will be the first mega-cap tech company to report earnings next week. Consensus estimates call for the Redmond, Washington-based software-and-hardware giant to post EPS of $2.32 for its fiscal first quarter. Revenue is forecast to increase to $49.9 billion, reflecting robust demand for its cloud computing products. 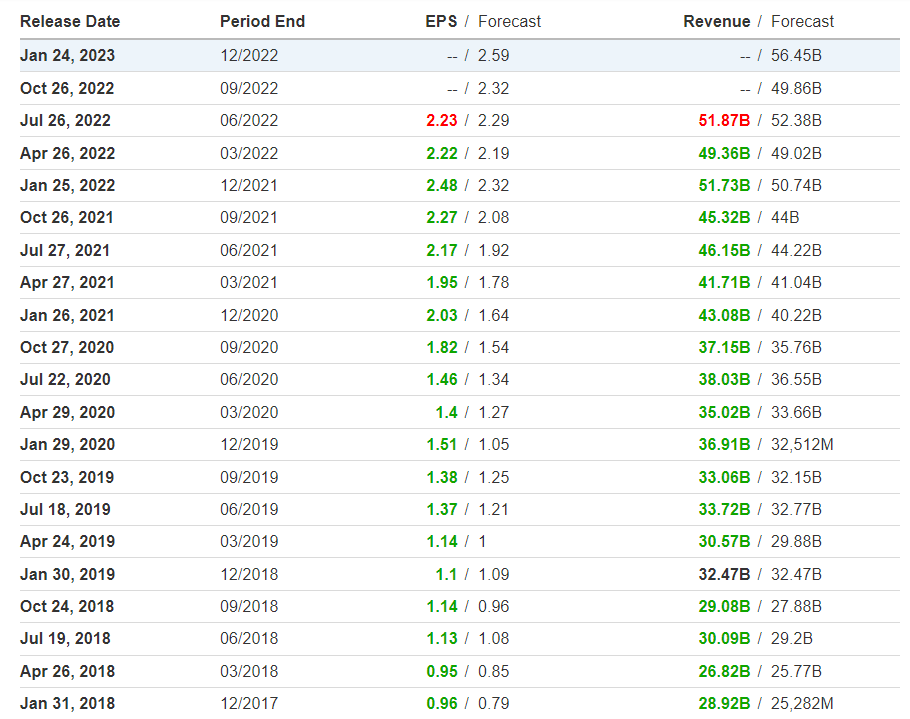 Investors will focus on growth in Microsoft’s booming Intelligent Cloud segment, which includes Azure, GitHub, SQL Server, Windows Server, and other enterprise services. The key unit saw sales growth of 20% in the last quarter to $20.9 billion, while revenue from its Azure cloud services grew 40%.

Revenue growth in the Productivity and Business Processes segment, including Office 365 cloud productivity software, Teams communications app, LinkedIn, and Dynamics products and cloud services, will also be of interest after rising nearly 13% to $16.6 billion in the preceding quarter.

Microsoft missed top and bottom line expectations in Q4 for the first time since 2016 due to negative impact of worsening foreign-exchange rates. Despite the miss, the software and hardware giant issued upbeat guidance for the year ahead.

Shares in the world’s second most valuable company, which recently fell to their lowest level since January 2021, are down 29.8% year-to-date (ytd) and 32.4% below their record peak. Despite recent volatility, I remain positive on MSFT and expect the stock to rebound in the months ahead given the promising long-term demand outlook for its cloud business, software tools, and hardware devices. 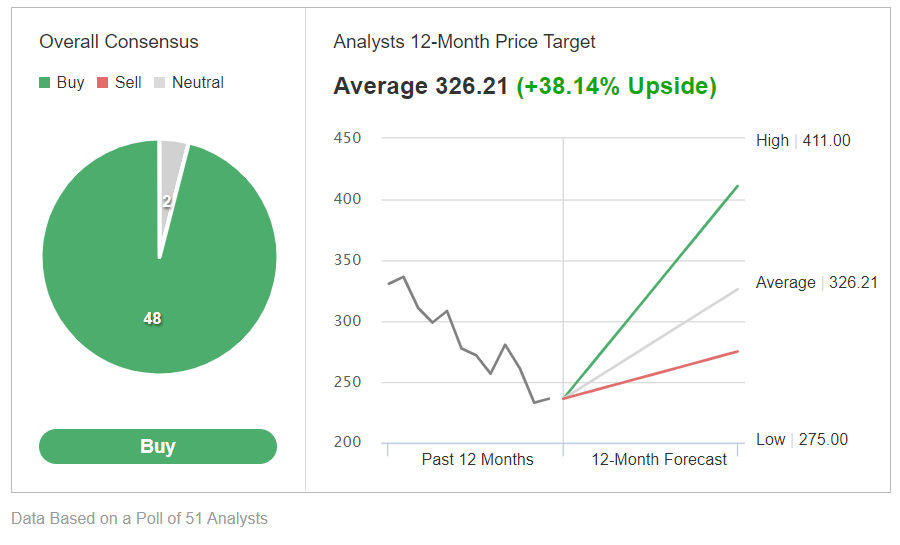 48 out of 51 analysts surveyed by Investing.com rate Microsoft’s stock as a ‘buy’. The quantitative models in InvestingPro point to a gain of 22.2% in MSFT stock over the next 12 months to $288.62, bringing shares closer to their fair value.

According to Investing.com, Google-parent Alphabet (NASDAQ:) is forecast to report EPS of $1.28 for the third quarter. Revenue is expected to increase 9.5% yoy to $71.3 billion. 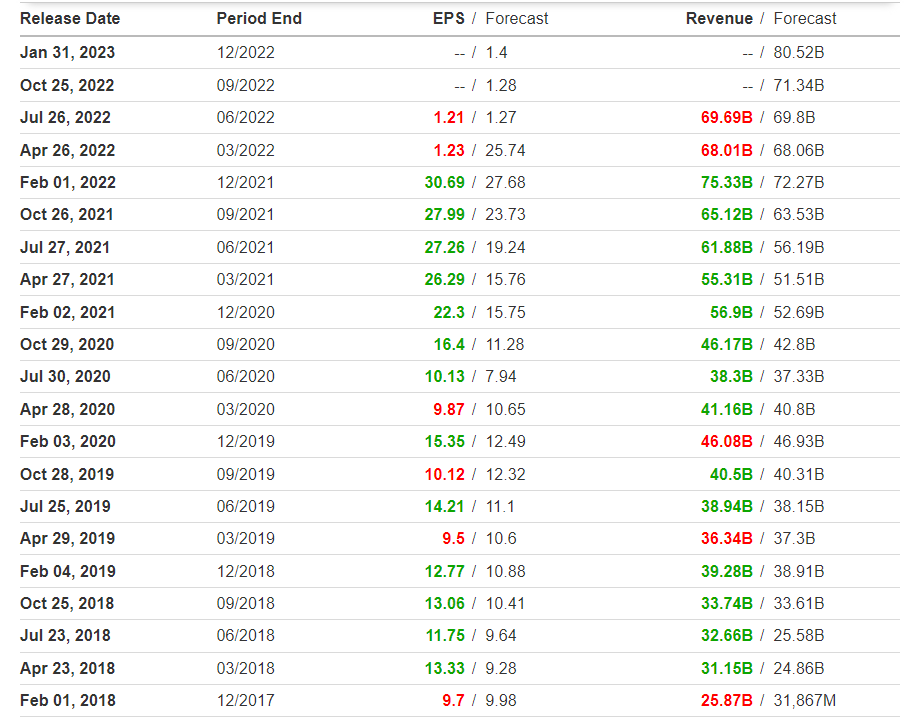 Investors will stay focused on growth rates at Google’s core ad revenue business, which saw an annualized gain of just 12% to $56.3 billion in the previous quarter. YouTube ad revenue growth will also be eyed after falling significantly short of expectations in the last quarter amid heightened competition from Chinese video-sharing app TikTok.

Alphabet’s update on the performance of its Google Cloud Platform will also be of importance after growth slowed dramatically in the last quarter. The search giant has been investing heavily in its cloud business, which lost $858 million in Q2, as it plays catch up with Amazon Web Services and Microsoft Azure, the top two players in the market.

GOOGL stock—which split 20-for-1 earlier this year—has fallen 31% ytd and is 34% away from its February 2022 record high. I believe the extreme selloff has created a compelling buying opportunity considering the robust demand for its innovative products and services. 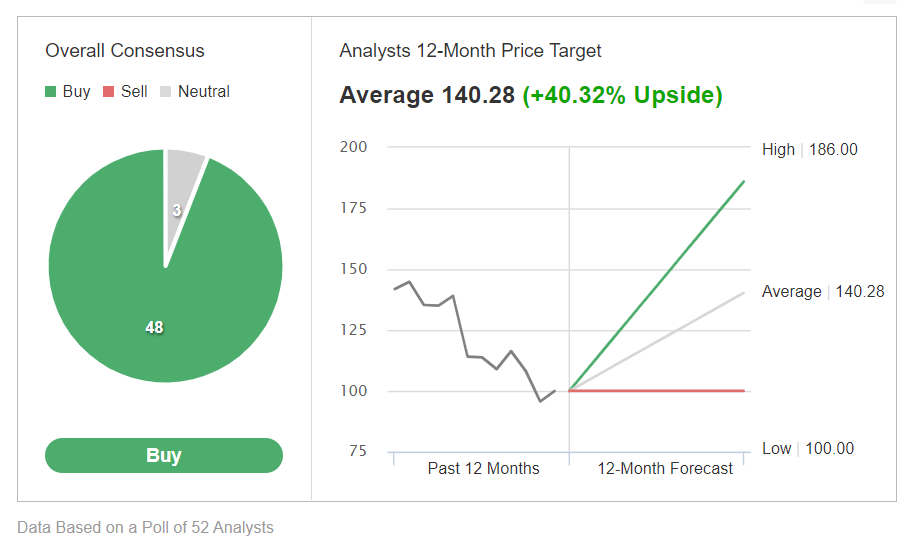 Out of the 52 analysts covering the stock, per an Investing.com survey, consensus recommendation is ‘outperform’ with fairly high conviction as 48 analysts rate GOOGL at ‘buy.’ The average fair value price for the shares on InvestingPro stands at $135.70, a potential 36% upside.

Facebook-parent Meta Platforms (NASDAQ:) is projected to deliver Q3 EPS of $1.93, down 40% due to rising costs and investments related to its bet on the metaverse. Revenue is forecast to slide amid weak advertiser demand and lower ad prices on Facebook and Instagram. 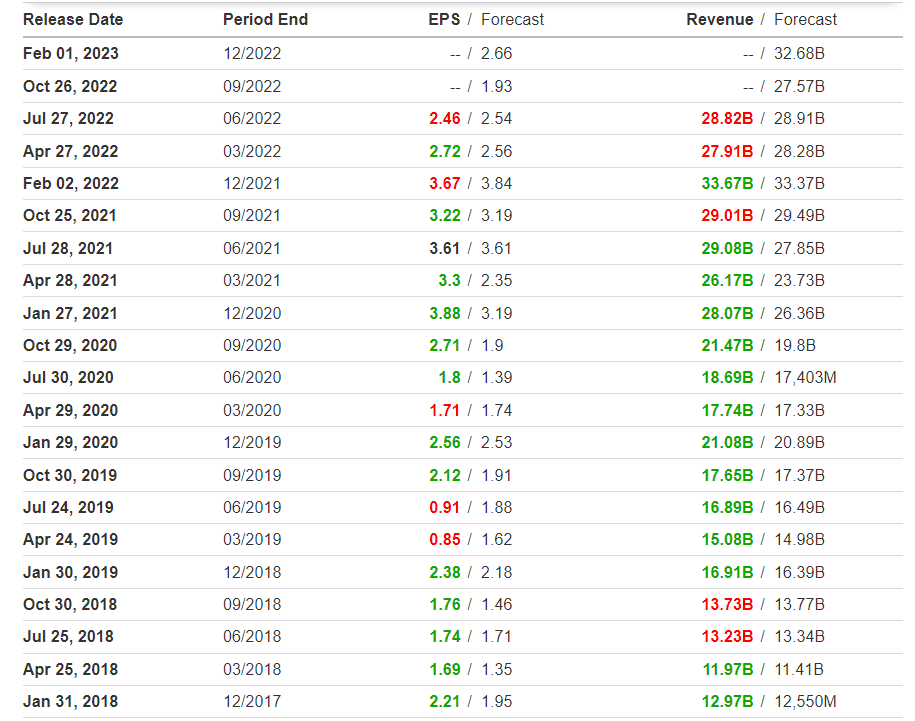 The market will pay close attention to Meta’s update on the performance of its Reality Labs, which is responsible for developing the metaverse and related virtual reality and augmented reality technologies. The unit generated $452 million in sales in Q2 but recorded a $2.8 billion loss. Any detail from CEO Mark Zuckerberg will be welcomed as the social media platform continues to spend heavily while it shifts away from an advertising-based business and positions for an increasingly digital future.

Last quarter Meta missed on earnings and suffered its first-ever drop in revenue as advertisers pulled back on spending. It also issued a shockingly weak forecast, citing continuation of sluggish advertising demand.

It’s been a tough year for Meta, whose shares recently sank to their lowest level since January 2017 amid a troubling performance in its core ads business resulting from Apple’s crackdown on ad tracking across iOS apps, as well as growing competition from companies like TikTok.

In my view, shares are vulnerable to further losses amid a toxic combination of worsening fundamentals and a deteriorating macro backdrop. 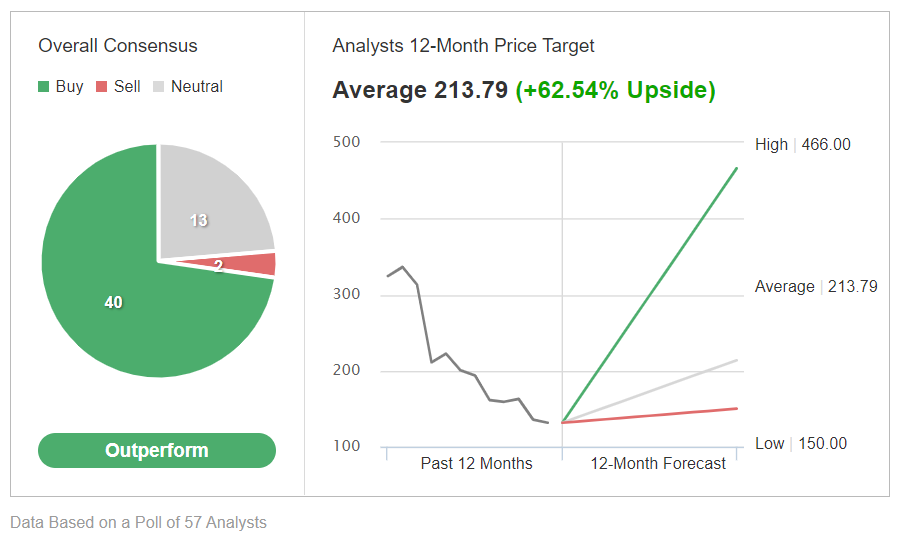 Despite near-term headwinds, most analysts remain generally bullish as per an Investing.com survey which revealed that 40 out of 57 analysts rated it as ‘buy’. The average fair value price for Meta shares on InvestingPro is $210.58, a potential 60% upside.

According to Investing.com, Apple (NASDAQ:) is expected to report EPS of $1.26 for its fiscal fourth quarter. Revenue is forecast to increase to $88.7 billion on strong demand for its smartphones. 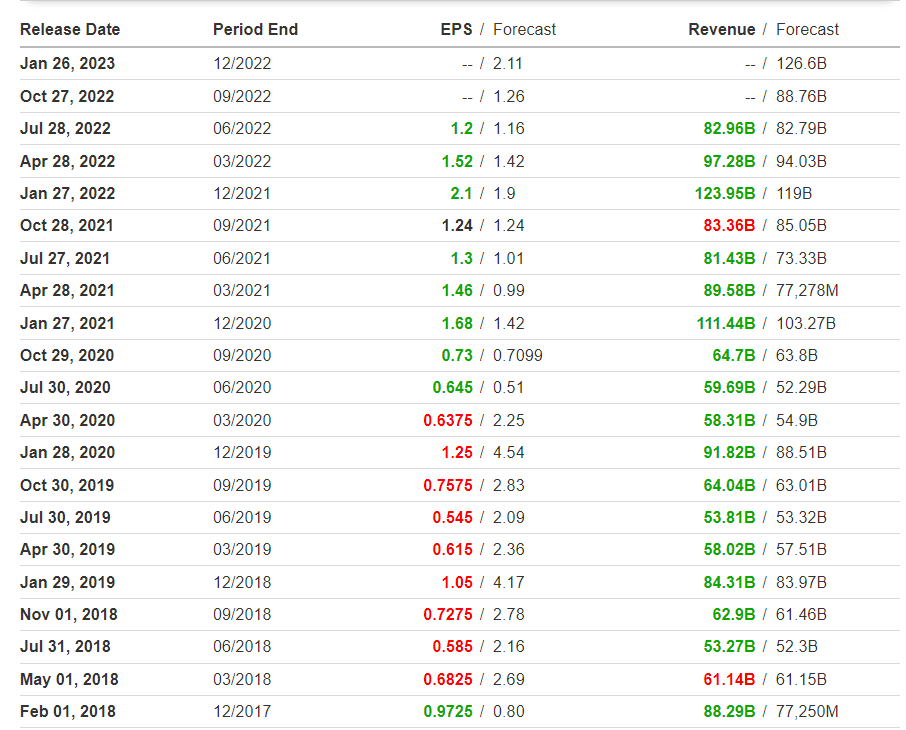 Wall Street will pay close attention to Apple’s iPhone business to see if it can keep up its strong performance. Last quarter, iPhone sales rose 3% to $40.6 billion.

Apple’s booming services business, which was the fastest growing segment in fiscal Q3 with yoy revenue growth of 12%, will also be eyed. It includes sales from the App Store, monthly subscriptions, payment fees, extended warranties, licensing fees, and advertising.

One weak spot is expected to be the company’s iPad business where sales dipped 2% in the last quarter, as it struggles with various supply chain constraints. Mac revenue, which slumped 10% yoy, will also be of interest amid a deteriorating PC market.

Apple’s stock has fallen 19.2% ytd and is 21.6% below its all-time peak in January 2022. Investors that missed the stock’s sharp moves higher last year should consider buying shares at these levels, given its dependably profitable business model, healthy balance sheet, and enormous cash pile. 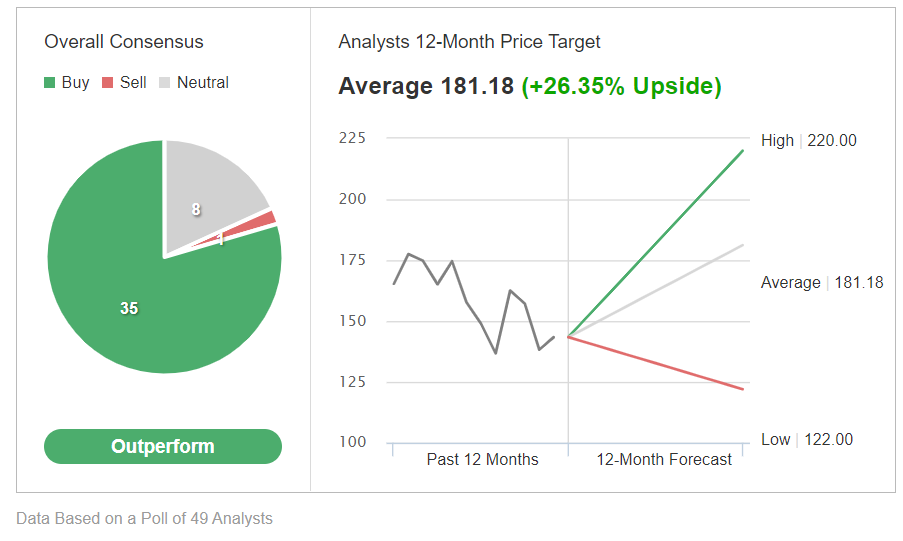 Indeed, 43 out of 49 analysts surveyed by Investing.com rate Apple’s stock either as ‘buy’ or ‘neutral’.

Consensus expectations call for Amazon (NASDAQ:) to report Q3 EPS of $0.21, dropping 28.8% yoy as it struggles to rein in elevated shipping costs and higher labor expenses. Revenue is expected to jump 15.3% yoy to $127.7 billion, reflecting ongoing strength in its cloud computing and advertising businesses. 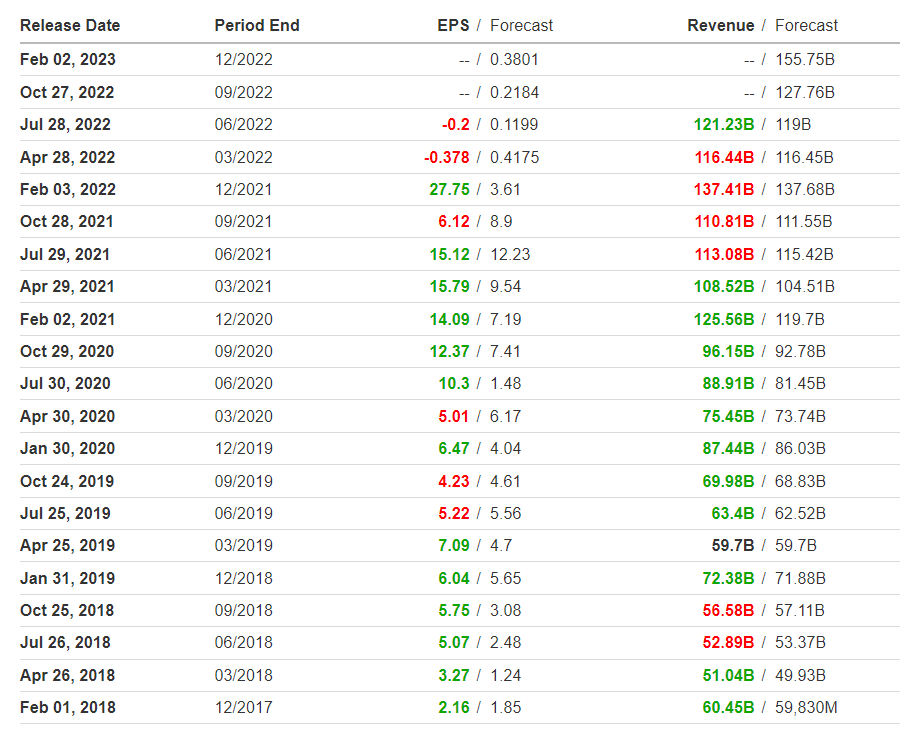 Investors will be watching the company’s thriving Amazon Web Services (AWS) cloud unit, which recorded a 33% increase in revenue last quarter, to see if it can maintain its torrid pace of growth. Advertising revenue, which has increasingly become another major growth driver for Amazon, will also be eyed after scoring annualized sales growth of 18% in Q2.

Perhaps of greater importance will be Amazon’s operating income and revenue guidance for Q4, which covers the holiday shopping season, given the macro pressures including accelerating inflation, slowing consumer discretionary spending, and unfavorable foreign exchange rates.

AMZN stock has lost about 31% ytd and is roughly 39% away from its July 2021 all-time high. Despite the anticipated slowdown in profit and sales growth, I believe the stock is poised to bounce back in the months ahead, considering its leading position in the e-commerce and cloud-computing spaces. 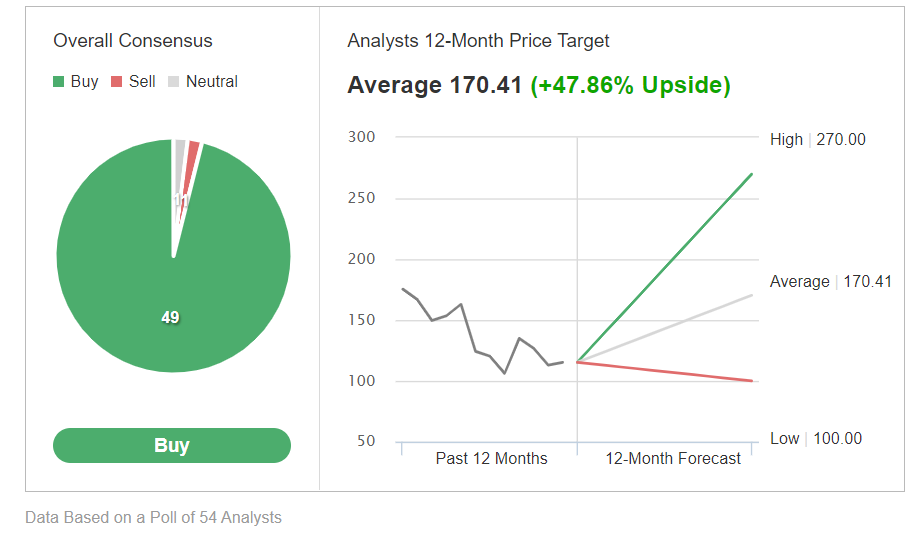 Analysts also remain optimistic about the Seattle, Washington-based tech titan: according to an Investing.com survey, 49 out of 54 analysts rate the stock as ‘buy’ and according to the Investing Pro model, the stock could increase 22.4% from current levels bringing it closer to its fair value of $141.10 per share.

Disclosure: At the time of writing, Jesse is long on the S&P 500 and Nasdaq via the SPDR S&P 500 ETF and Invesco QQQ ETF. He is also long on the Technology Select Sector SPDR ETF. The views discussed in this article are solely the opinion of the author and should not be taken as investment advice.

Alibaba: Let's Address The Elephant In The Room (NYSE:BABA)

Week Ahead: Fed Meeting Will Test The Short-Term Rebound

This Adani Stock is up by 14% Within 10 Days! After Breakout!

Digitalization, Digital Transformation and Sustainability in the Global Economy: Risks and Opportunities (Springer Proceedings in Business and Economics)