Shares of America’s leading motorhome manufacturer Winnebago Industries, Inc. (NYSE:WGO) slipped -10.2% on Wednesday after what seemed like an earnings beat at a first glance. WGO reached a low point of $52.21 with  -13.2% in daily losses before recouping some gains and losing above $54.

Winnebago finished its final quarter of the fiscal year by growing earnings per share by 14% over the year to $3.02 per share and beating consensus forecasts of $2.77 per share.

The company also grew top line sales by 14% over the year to $1.18 billion and beat analyst forecasts of around $1.1 billion. 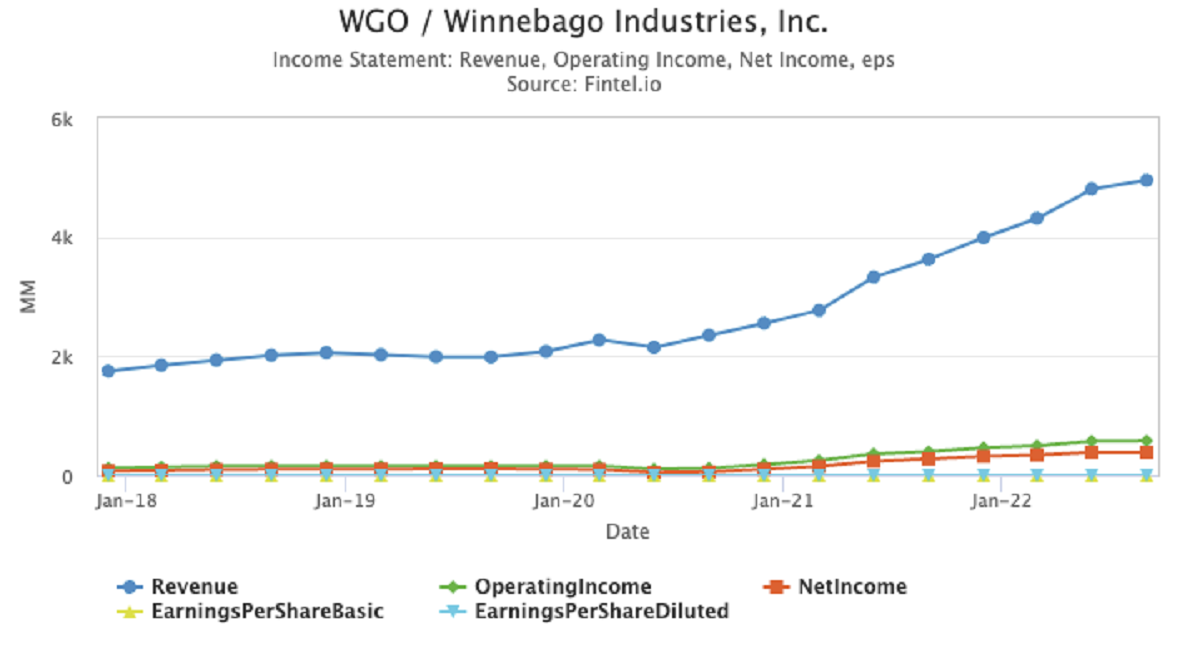 Gross profits increased 12.4% over the year to $210.4 million as growth in sales outpaced the growth in costs, driving higher product margins.

When delving into segment performance, the Motorhome segment was the stellar performer generating $555.8 million in revenue and beating forecasts by a whopping ~$100 million. The segment delivered 3,291 Motorhomes during the quarter.

The Marine segment generated $122.1 million in sales and was about 10% of forests on 1,580 unit deliveries.

The Towables segment saw revenue decline -11.8% over the year to $494.2 million. While the street was forecasting a decline in revenue over the year, the result missed the streets’ expectations by -7%.

The chart to the right provided from WGO’s Fintel financial metrics and ratios page shows the growth in sales and profitability since the beginning of the pandemic.

Analyst Bret Jordan from Jefferies Investment Bank expects to see margin pressure in FY23 as consumer trends soften and dealers restock inventory. Jordan highlights that industry-wide overproduction in early 2022 could contribute to a significant slowdown in wholesale shipments. Jefferies remains neutral with a ‘hold recommendation and a $50 target for the stock.

A contrarian and more upbeat view from analyst Michael Swartz from Truist Securities viewed the softer towable TV margins as a function of timing over wholesale profitability declines. While production is slated to fall and the sector faces headwinds over the year, Truist believes WGO is well positioned to experience market share tailwinds that should accelerate in 2023 and remains ‘buy’ rated on the stock with a bullish $62 target.

Commentary from the street blamed most of the stocks weakness on the 37.5% backlog decline over the year to $2.58 billion, raising concerns with investors that consumer demand is deteriorating.

The groups CEO Mike Happe did state that the company was not experiencing cancellations but instead a return to a post-pandemic normalized demand environment with supply chains that are returning to normal.

Given that a motorhome may seem as a luxury item and not a necessity, investors remain concerned that consumer demand will only be impacted further as the economy edges towards recession as rates rise.

Despite the cautious investor sentiment, Winnebago continued to drive capital management initiatives in order to utilize record profit levels and returned $85.8 million of cash to shareholders during the quarter in the form of stock buy backs and dividends.

In August, WGO increased their quarterly dividend by 50% to 27 cents per share and authorized a $350 share repurchase program worth $350 million.

On a blended view of the stock’s metrics, Fintel’s quant analysis indicates WGO has strong Quality, Value and Momentum relative to peers in the market. These qualities are used in Fintel’s QVM score calculation which uses all three factors and ranks stocks against global securities.

The score is based on three factors. The first being Quality, which identifies companies based on their cash generating efficiencies.

The second factor of Value is where WGO excels the most. WGO trades on a ‘cheap’ price to earnings ratio of 4.64x which is well below the S&P 500 average.

The third factor of Momentum is where WGO is the weakest with a score of 64.02. This score is based on a stock’s  six-month momentum. WGO has a 6 month rolling return of -3.62% which is relatively flat.

How to Make Money in Stocks: A Winning System in Good Times and Bad | Fourth Edition

The Ultimate And Simplified Algorithmic Day Trading Strategies For Beginners